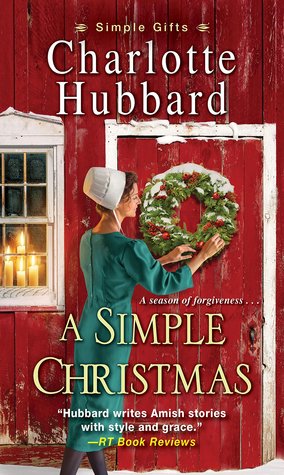 I liked the family, friends and some oh so English the author put in this story! In this one a few of the Amish are not who we think they are and the ways it comes out! Oh my the reality of what was going on! ! I had trouble putting this one down.

*Check out this blog hop stop to enter her giveaway. https://jenniferfaye.com/hearts-scribbles/2018/10/1/giveaway-excerpt-a-simple-christmas-by-charlotte-hubbard-amish-romance-books

About the book:   The rustic beauty of a country Christmas fills the Simple Gifts crafts shop, while the Amish residents of Willow Ridge pull together in uncertain times—and in the face of an unexpected homecoming.

Nora Hooley’s shop is abuzz with preparations for the holiday open house, and Rosalyn Riehl is handcrafting wreaths from evergreen boughs, pine cones, and other natural materials. The work is a welcome diversion for the only unmarried daughter of Cornelius Riehl: her gruff dat has been receiving envelopes marked Past Due, leaving dutiful Rosalyn to manage the household’s inexplicably shrinking budget. Then another distraction swaggers into Simple Gifts—blue-jeaned and leather-jacketed, with a reputation that precedes him.

Marcus Hooley hightailed it to Willow Ridge on a wing and a prayer—not that he’s the praying type. He rejected his Amish roots long ago. But behind the bad-boy attitude is a gifted horse trainer who’s counting on some bent-but-not-broken family ties to throw him a lifeline. He can’t erase his past, but a sparking attraction with strong, spirited Rosalyn holds the promise of a second chance . . . and of shedding light on shadowy secrets to build a bright tomorrow.

The bell jangled raucously as the front door flew open and hit the wall. “Hey—does anybody work here?” a young man called out. “You can’t tell me this town doesn’t even have a gas station.”

Nora turned quickly toward him, her eyes widening in recognition as she handed Rosalyn the star-shaped wreath. “This could get interesting,” she murmured.

Rosalyn watched as Nora took her time passing between the displays of handmade table linens and racks of hanging jackets, toward the fellow who’d entered with a gust of wind that had apparently blown the door out of his hand.

Or did he throw it open? Rosalyn wondered as she took in the man’s black leather jacket and the rakish way his dark hair dipped over one side of his face. Most English are at least courteous and they don’t come in before the store opens. This fellow looks like walking, talking trouble—with a capital T.

Rosalyn started slowly toward the front door, in case their unexpected guest caused Nora problems. She wasn’t sure what she’d do if this brash young man behaved improperly, but she knew Nora would be coming to her assistance in this situation. She wasn’t sure what to think, however, when the redheaded storekeeper walked quickly around him to shut the door against the wind. Nora faced their visitor, confidently crossed her arms, and gazed directly at him, unfazed by the fact that he stood head and shoulders taller than she did.

“Well, well, if it isn’t Cousin Marcus from Lancaster County, Pennsylvania,” Nora said as she looked him up and down. “Did you finally show up to check out Wyatt McKenzie’s job offer? Or did another girlfriend get smart and kick you to the curb for using her credit cards on the sly?”

Rosalyn gasped. Was this Marcus Hooley, the horse trainer Wyatt had called in October, hoping to hire an Amish man to manage the draft horse farm he’d recently established? Everyone in Willow Ridge was wondering why the cousin Luke, Ira, and Ben had recommended hadn’t bothered to provide the references Wyatt had requested. As Rosalyn looked more closely, she saw the resemblance this young man bore to Luke—and she couldn’t miss the rebellious flare of his pale green eyes as he stared at Nora.

Charlotte Hubbard is the acclaimed author of Amish romance and fiction that evokes simpler times and draws upon her experiences in Jamesport, the largest Old Order Amish community west of the Mississippi. Faith and family, farming, and food preservation are hallmarks of her lifestyle—and the foundation of all her novels. A deacon, dedicated church musician and choir member, she loves to travel, read, try new recipes, and crochet. A longtime Missourian, Charlotte now lives in St. Paul, Minnesota, with her husband and their border collie, Vera.