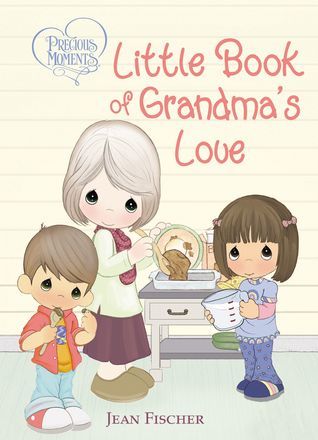 Little Book of Grandma’s Love is a sweet little hard cover book that shows the many ways Grandma shows her love and faith. The classic Precious Moments® artwork, fun poems, nice rhyming text, sweet prayers, and Bible verses make this an easy and fun little book to share. For example: “My picture for Grandma begins with a heart. I put us inside so we’re never apart.”This will be a favorite little book to share with my grandchildren for many years to come.

I was gifted a copy through BookLook bloggers, my review is voluntary.

ABOUT THE BOOK: Grandma’s love is the best kind of love! And nothing is more special than time together, whether you’re making cookies, playing games, or just cuddled up. Precious Moments Little Book of Grandma’s Love celebrates the special connection grandmothers share with their grandchildren and features classic Precious Moments art; sweet, rhyming text; and Scripture.

Time with Grandma is always fun! And what could be more fun than snuggling close and reading together about all the reasons grandmas and grandchildren love each other so very much? From gardening together to playing games to that special hug that only Grandma can give, you’ll love seeing all the ways a grandma’s love is so unique.

Through the classic Precious Moments® artwork, fun poems, sweet prayers, and Bible verses, Precious Moments Little Book of Grandma’s Love will remind your favorite grandma and her grandchildren that only God gives the gift of grandma’s love.

Daughters of Northern Shores by Joanne Bischof is the sequel to Sons of Blackbird Mountain and it’s one that will tell the story of this families faith and strength. This Norgaard family saga held me spellbound and having those, oh my, how is this happening and why now? Guilt, forgiveness, faith and strength of family and friends made this a powerful story in this Appalachian setting. Such good storytelling.

I requested a copy through BookLook Bloggers, my review is voluntary.

“The Norgaard brothers and their families will steal your heart.” —Catherine West, author of Where Hope Begins

Heartache and regret, boldness and sacrifice. What will restoration cost the beloved Norgaard family?

Aven Norgaard understands courage. Orphaned within an Irish workhouse, then widowed at just nineteen, she voyaged to America where she was wooed and wed by Thor Norgaard, a Deaf man in rural Appalachia. That the Lord saw her along the winding journey and that Aven now carries Thor’s child are blessings beyond measure. Yet while Thor holds her heart, it is Haakon—his younger brother and rival—who haunts her memories.

Having fled the Norgaard orchard after trying to take Aven as his own, Haakon sails on the North Atlantic ice trade, where his soul is plagued with regrets that distance cannot heal. Not even the beautiful Norwegian woman he’s pursued can ease the torment. When the winds bear him home after four years away, Haakon finds the family on the brink of tragedy. A decades-old feud with the neighboring farm has wrenched them into the fiercest confrontation on Blackbird Mountain since the Civil War. Haakon’s cunning and strength hold the power to seal many fates, including Thor’s—which is already imperiled due to a grave illness brought to him at the first prick of warfare.

Now Haakon faces the hardest choice of his life. One that shapes a battlefield where pride must be broken enough to be restored, and where a prodigal son may finally know the healing peace of surrender and the boundless gift of forgiveness. And when it comes to the woman he left behind in Norway, he just might discover that while his heart belongs to a daughter of the north, she’s been awaiting him on shores more distant than the land he’s fighting for.

Let’s All Make The Day Count by Charlie Daniels is a daily devotional.  His wisdom and life lessons are easy to remember and think about throughout the day. I enjoy learning about Charlie Daniels, his life is very interesting and inspiring.  With his life lessons shared throughout the 100 readings I looked forward to the next days lesson and often looked ahead to see what tomorrows ‘make the day count’ saying would be.  The book is a smaller hard cover book. I gifted this devotional to my husband for Christmas and it is truly one we both enjoy sharing each morning to start our day. I think it is one we will reread many times.

I received this book free from the publisher through the BookLook Bloggers <http://booklookbloggers.com> book review bloggers program. I was not required to write a positive review.  My review is voluntary.

Beloved American icon and Grammy Award–winning musician Charlie Daniels shares wit, wisdom, and life lessons he has learned from traveling and playing across the country.

Let’s All Make the Day Count imparts Charlie’s positive attitude, timeless insight, and powerful spirit, and it will encourage and inspire you to make your day count.

Learn how you can make your day count from the encouraging and inspiring Charlie Daniels. Charlie has written a song for Elvis, played on a Bob Dylan album, toured the country for decades, and delighted fans around the world with his fiddle playing and signature hit song “The Devil Went Down to Georgia.” More important, he’s dedicated his life to helping others, including children, troubled teens, and veterans.

Let’s All Make the Day Count imparts Charlie’s positive attitude, timeless insight, and powerful spirit, and it will encourage and inspire you to make your day count.

This is a fun book about Big Trucks, Betting the Job Done Together. It’s a nice size board book of 12 pages with rubbery tires and gritty dirt to feel during the story. My little ones love the reflective windows on the “Yellow” truck and lots of pages to make the Vroom, Vroom sounds of trucks.  The touch-and-feel elements do increase sensory development and the simple rhymes were fun to read.

*I received this book via the Book Look Bloggers program, no review was required and my review is voluntary. Thank you to Tommy Nelson/Thomas Nelson publishing. All opinions are my own.

Join the big trucks on the construction site!

Little ones will love to explore these tactile pages—from rubbery tires to gritty dirt—and learn from the trucks how much fun it can be to work together. With touch-and-feel elements to increase sensory development and simple rhymes to boost vocabulary, Big Trucks will help your child discover something new with every read!

( from Coloring Christmas Devotions)    “He is waiting for us to see the greatest prize.. HIM!”

Such a nice book to enjoy Christmas devotions, color the lovely illustrations and reflect on God’s greatest gifts. I enjoyed the  well written inspirational devotions, the Scripture verses and the festive illustrations. Small enough to carry along with a couple gel or ink pens for making quiet times in a busy day.  The heavy paper pages are perforated if you want to remove from the book. Very nice, I would recommend these inspirational coloring books at Coloring Faith by Zondervan for anyone who enjoys coloring and faith based books.

You can purchase a copy  “HERE”

I received a complementary copy from HaperCollins Publisher through BookLook Bloggers and my review is voluntary.

Enjoy all the best parts of the Christmas season as you spend time reflecting on God’s greatest gift for His children: the birth of Jesus. This unique coloring book also includes devotions perfect for the season. Take a few minutes out of the busyness of Christmas to spend time in devotional thought, while relaxing through stress-free coloring.

With inspirational devotions on one side and a festive Christmas scene to color on the opposite page, Coloring Christmas Devotions will be a welcome part of your holiday celebrations. Take a few quiet moments to yourself to reflect on the reason behind the festivities as you read through the Scripture verses and devotions and color the pen-and-ink illustrations.

This coloring book is unique with a trim size that is easy to fit into a purse or bag, an embellished cover, perforated pages, and a low price point.

A beautiful gift or a fun treat for yourself, Coloring Christmas Devotions will help you focus your heart on the true meaning of Christmas.

This is a Bible I really think a younger person will truly enjoy. Bright interesting illustrations in a bold and shiny hard cover. I really liked that it came in the NKJV version. The pages of Scripture are filled with unique materials and interesting information throughout, including exciting art featuring the Genesis Exploration Squad. A lot of pages to explore and to enjoy.  There were interesting questions and answers that I found to be  great lessons even for this grandmother.  I really enjoyed reading through this Kids Study Bible and then I gifted it to my 7 year-old grandson for a very special celebration day.  I checked out the web site of bonus material.. awesome!

So head over and discover the bonus features and more at AirshipGenesis.com ! I think you will find it will be a wonderful adventure your young person will love..

“With a new generation rising up, we have the chance to leave a legacy of great inheritance. Airship Genesis: Legendary Bible Adventure means giving our children the truth of God’s Word with the creative content and quality they deserve.”

In the Airship Genesis: Legendary Bible Adventure, the Genesis Exploration Squad is commissioned to embark on a series of adventures that takes them throughout the Bible. Each mission is a learning experience, both in biblical understanding as well as character building.

I received a free copy of this Bible from Thomas Nelson through BookLook Bloggers to review. I was not required to review positively and all opinions are my own.