What a story of lies, secrets, young love, murder, fire and convictions on circumstantial evidence! He said, she said, what the evidence pointed to… how do you prove your innocence when  you can’t?  Twists and turns that give you the evidence until you think you know who is guilty but do you really? Kept me guessing until the end!

One father was murdered, and another convicted of his death. All because their children fell in love.

Nate Beckett has spent his life fighting wildfires instead of the lies and rumors that drove him from his Colorado home town. His mother begs him to come to Carlisle now that his father has been released from prison, but it isn’t until he’s sidelined by an injury that he’s forced to return and face his past. But that means facing Brenna too.

Fourteen years ago, Nate was in love with the preacher’s daughter. When Pastor Strickland discovered Brenna had defied him to sneak out with Nate, the fight between Strickland and Nate’s drunken dad was loud—and very public. Strickland was found murdered later that night, and everyone accused Roy Beckett. When the church burned down, people assumed it was Nate getting even for his father’s conviction. He let the rumors fly and left Carlisle without looking back.

Now, Brenna is stunned to learn that the man convicted of murdering her father has been pardoned. The events of that night set her life on a bad course, and she’s dealing with a brutal custody battle with her ex and his new wife where he’s using lies and his family’s money to sway the judge. She’s barely hanging on, and she’s turned to alcohol to cope. Shame and fear consume her.

As they deal with the present—including new information about that fateful night and a wildfire that’s threatening their town—their past keeps igniting. Nate is the steady force Brenna has so desperately needed. But she’ll have to learn to trust him again first.

Terri Blackstock has sold over seven million books worldwide and is a New York Times and USA TODAY bestselling author. She is the award-winning author of Intervention, Vicious Cycle, and Downfall, as well as such series as Cape Refuge, Newpointe 911, the SunCoast Chronicles, and the Restoration Series. Visit her website at www.terriblackstock.com; Facebook: tblackstock; Twitter: @terriblackstock

I woke up in a blinding bright room, my clothes off and something clamped to my face. I tried to reach it, but I couldn’t bend my right arm, and my hand stung. An IV was taped to my other hand, but I moved carefully and touched the thing over my face.

An oxygen mask. I tried to sit up. “What happened?”

T-bird came to my bedside, a sheen of smoky sweat still soiling his face. “Nate, lie back, man.”

“They’re still there. Making progress. But you’re not going anywhere near a fire for a month or so.”

I took the mask off and coughed a little, but managed to catch my breath. “A month?”

“Yep. Second degree burns on 20 percent of your body. Some of the burns are deep.”

It came back to me, the event that had gotten me here.

“The family. Were they injured?”

“Not a scratch or burn. Turns out it was a U.S. Senator from Kansas. He says you’re a hero.”

“You know I had no choice. They were in the path—”

“Take the praise where you can get it, man. We don’t get that much.”

I looked at my right side. My right arm was bandaged, and so was my side and down my right leg to the point where my boots had stopped the flames. Second degree wasn’t so bad, I told myself. Third degree would have been brutal. I’d be able to leave the hospital soon. I’d heal.

“Yes, you will. They can’t let you go back. Doctor’s orders. You’re grounded until he releases you.”

I managed to sit up, but it was a bad idea. The burns pulling on my skin reminded me why I shouldn’t. “I can’t be grounded during fire season. Are you crazy? I need to be there. You don’t have enough men as it is.”

“Sorry, Nate. It is what it is. Why don’t you go home to Carlisle for a while? Take it easy.”

Go home? Pop had just been pardoned, and he and my mom were trying to navigate the reunion. Though she would love to have me home, I didn’t know if I was up to it. My father could be challenging, and fourteen years of prison hadn’t done him any favors.

As He Leads is Joy, November 9

Among the Reads, November 11

Spoken from the Heart, November 13

By The Book, November 14

For Him and My Family, November 14

Through the Fire Blogs, November 15

For the Love of Literature, November 18

Lights in a Dark World, November 19

For The Love of Books , November 20

All 4 and About Books, November 21

*No Giveaway for this Celebration Tour

I could not hardly put this final book in the series down! Action packed, the suspense, the twists and turns.. This Christian Suspense was everything the reviews said it was.. I loved it, definitely going on my favorites list!

I was gifted a copy through the Fiction Guild and NetGalley, my opinion and review is voluntary..

THE HUNT IS ALMOST OVER.

Casey Cox is still on the run after being indicted for murder. The hunt that began with her bloody footprints escalates, and she’s running out of places to hide. Her face is all over the news, and her disguises are no longer enough. It’s only a matter of time before someone recognizes her.

Dylan Roberts, the investigator who once hunted her, is now her only hope. Terrifying attempts on Dylan’s life could force Casey out of hiding. The clock is ticking on both their lives, but exposing the real killers is more complicated than they knew. Amassing the evidence to convict their enemies draws Dylan and Casey together, but their relationship has consequences. Will one life have to be sacrificed to protect the other?

With If I Live, Terri Blackstock takes us on one more heart-stopping chase in the sensational conclusion to the If I Run series.

“Crisp dialogue and unexpected twists make this compulsive reading. . .” —Publishers Weekly review of If I Run 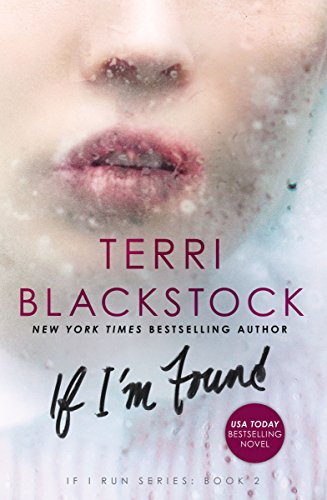 Wow.. riveting is the right word for this book! Fast paced, page turner and maybe even hold my breath reading.. This gal knows what she is doing and I liked that she had some breaks as she was in hiding. Loved it!

I received a copy through Fiction Guild and I requested a copy on NetGalley and my opinion and review is voluntary.

In this riveting sequel to the USA TODAY bestseller If I Run, evil lurks, drawing Casey out of the shadows . . . but there is light shining in the darkness.

Casey Cox is still on the run, fleeing prosecution for a murder she didn’t commit. Dylan Roberts—her most relentless pursuer—is still on her trail, but his secret emails insist he knows the truth and wants to help her. He’s let her escape before when he had her in his grasp, but trust doesn’t come easily.

As Casey works to collect evidence about the real murderers, she stumbles on another unbearable injustice: an abused child and a suicidal man who’s also been falsely accused. Casey risks her own safety to right this wrong and protect the little girl from her tormenters. But doing so is risky and may result in her capture—and if she’s captured, she has no doubt she’ll be murdered before she ever steps foot in a jail cell.

I enjoyed the continuing story line in this series. Eddie found the love of his life but I was wanting more.. left me with a lot of questions.. Maybe I’ll find them in the next book to come.. Still it was well written, I enjoyed the family and faith element

I was gifted a copy and my review is voluntary.

ABOUT THE BOOK: All detective Eddie Thibodeau wants to do is marry the woman he loves, but after a Facebook post goes viral, that may not be easy. It seems half the women in Portland are in love with the handsome detective, and Leeanne Wainthrop isn’t sure whether she can trust Eddie’s declaration of love or not.
A dead man found in Chief Mike Browning’s back yard on Christmas Day is the first clue to a plan hatched from vengeance. Can Eddie ignore the distractions of his love life and measure up when he comes face to face with a hired killer? The men of the Priority Unit are ready to stop a released criminal intent on murder. Once again, they set out to deliver Maine Justice.

Wonderful Christian suspense! A buried body found next door brings danger to the whole family and the suspense solving the mystery tests the skills of the Priority Unit.. wow! page turner!

ABOUT THE BOOK:The charming stone house next door is for sale! How could there be a down side to that?
As his wife Jennifer’s due date approaches, Captain Harvey Larson decides to invest in real estate, unaware of the terror this will cause his family. The neighboring house seems ideal for Jennifer’s brother Jeff and his wife. A hidden cupboard isn’t so bad—in fact, it’s almost fun to try to solve the little mystery inside it. But will any of their loved ones want to live next door after they learn what’s in the basement?
The men of the Priority Unit might be wasting their time, trying to prove one dead man killed another. Or is the murderer still alive, and ready to strike again? Join them on their latest case as they deliver Maine Justice.